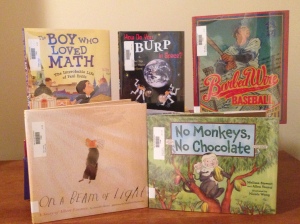 For my first “Mind the Gap” post, I read a few short non-fiction works.  (I figured I’d ease my way into my reading gap.) All of these are non-fiction or biographies.   The books were short and so are the reviews.  The summaries are from our catalog records.   I’ve tried to include a brief reflection and fiction books to pair.

How Do You Burp in Space? : and Other Tips Every Space Tourist Needs to Know by Susan E. Goodman.  “A non-fiction travel guide to space tourism that includes information about accommodations, attractions, and more.” –Provided by publisher.

Reflection: Quite an interesting book with many facts about past and future trips into outer space.  Focuses on the possibility of space tourism.  Many photos of astronauts accompany the text.  One criticism: the timeline in the back is very cursory.  Many more items could have been added.

No Monkeys, No Chocolate  by Melissa Stewart.  After reading this book, the word “chocolate” may bring to mind not only candy and ice cream, but also lizards, fungi, and monkeys–all part of the cocoa trees’ ecosystem. Includes further information on cocoa and rainforests and suggestions to help save rainforests.

Reflection: I loved that the author talked about all of the “gross” things (ants, maggots, fungi, etc.) that are involved with this ecosystem.  A fun feature of this book is the two tiny book worms, drawn at the bottom of each page, who banter comically about the text.  Very cute!

On a Beam of Light : A Story of Albert Einstein by Jennifer Berne.  A boy rides a bicycle down a dusty road. But in his mind, he envisions himself traveling at a speed beyond imagining, on a beam of light. This brilliant mind will one day offer up some of the most revolutionary ideas ever conceived.

Reflection: A great read to introduce the life of Einstein.  The watercolor illustrations seem simple and quirky but they are perfect for the subject.

The Boy who Loved Math : The Improbable Life of Paul Erdos by Deborah Heiligman.  An introduction to the world of math and a fascinating look at the unique, if not eccentric, character traits that made the noted mathematician “Uncle Paul” a great man.

Reflection: This short biography is about a man I had not known about. Paul Erdos was a mathematician who was fascinated by prime numbers.  The author tries to reinforce this fascination by working numbers into to the text and writing the numbers as numbers rather than text (i.e. “1,000,000” rather than “one million.”)  I think this gimmick falls a little flat though… I found it a little annoying.

Barbed Wire Baseball by Marissa Moss.  Traces the childhood dream of Japanese-American baseball pioneer Kenichi Zenimura of playing professionally and his family’s struggles in a World War II internment camp where he organizes baseball teams to raise hope among the inmates.

Reflection: This subject is near and dear to my heart mainly because I didn’t even know about the Japanese internment until I was in graduate school!  I’ve wondered how I could have made it through all of my years of education with no knowledge of these events.  I decided that I would provide my students with opportunities to learn what I had not.  This is a well written story with beautiful illustrations.

Maybe it’s because I’m reading more blogs and tweets this summer, but I have been thinking a lot about what I’m reading and what I’m recommending (and what I’m not.)  In this June post from School Library Journal, Reading Nonfiction for Pleasure | On Common Core, the authors talk about how non-fiction is underrepresented on summer reading lists.  Ryan M. Hanna in his Reflections post on Nerdy Book Club discusses how teachers who reflect on their various reading lives (how they’ve progressed to the readers they have become) can help their students make better book choices.  Here’s part of my comment in response to Matt’s post:

“Right now I have an entire box full of fiction that I brought home from my library for summer reading. I had every intention of bringing home some non-fiction, and biographies, and graphic novels, but my box was already full!”

As I reflected (an read comments from Matt) I realized that I have a huge reading gap.  I love children’s fiction.  I love young adult fiction.  I love fiction in general.  Everything else I read when I get to it.  Of course… I never get to it.  (There’s just so much good fiction!)  I’m guilty of not recommending many genres (non-fiction, biographies, graphic novels) not because there are not amazing works out there, but because I don’t know it well enough to share.

I suggested this challenge:

“How about this challenge? What 5 books are on your “I Know I Should Read This But I’d Rather Clean the Cat’s Smelly Litter Box” list? OK… its not that I don’t want to read, these I really do, but as the saying goes… “so many books, so little time…” With a choice between these and a fiction book, I know what I’m going to choose.”

I agree… maybe the title of the challenge is a little harsh… How about the “Mind the Gap” Challenge.

My goal for the remainder of the summer is to not only keep up with my fiction, but to mind my reading gap.  The MTG Challenge will be to read all of the books on my list (and then some.)  Look forward to some Summer Reading MTG posts in the future.

What titles do you know you should read, but keep pushing to the bottom of your stack? What’s on your MTG list? Are you up for the MTG challenge?